Over the last two seasons, the Serviced Supply Chains project has worked with a significant mango exporter to monitor several mango export consignments to China and South Korea. The consignments included one sea and seven air shipments in 2016-17, and three sea and nine air shipments in 2017-18. New monitoring technologies such as RFID-based Xsense (BT9 Ltd) and SIM-based SmartTraxx (Emerson) temperature loggers were used.

Monitoring and comparing the temperature profiles during the 2016-17 season identified the following risks to product quality in air shipments:

2. Often significant temperature differences between the outside of pallets and the inside and also within a pallet and across pallets based on the tray layer (vertical) and pallet position on the skid (horizontal). For example, in one air shipment to South Korea, temperature of trays in the middle of the pallet were 15°C warmer than trays in the top or bottom of the pallet.

These improvements resulted in lower average temperatures on importer arrival in 2017-18 (Table 1), mainly because of improved temperature management at the freight forwarder, including re-cooling before aircraft loading if required.

Figure 1 illustrates typical temperatures for a commercial air freight consignment to South Korea in the 2016-17 and 2017-18 seasons, which are close to the average conditions across the consignments monitored in each of the two seasons. In 2017-18, the arrival temperatures were lower largely because of cooling undertaken at the freight forwarder at the request of the exporter. Effective cooling at the packhouse and importer also helped manage these temperatures through the supply chain. The improved temperature management in the 2017-18 season also resulted in smaller temperature differences between the outside and inside of pallets. 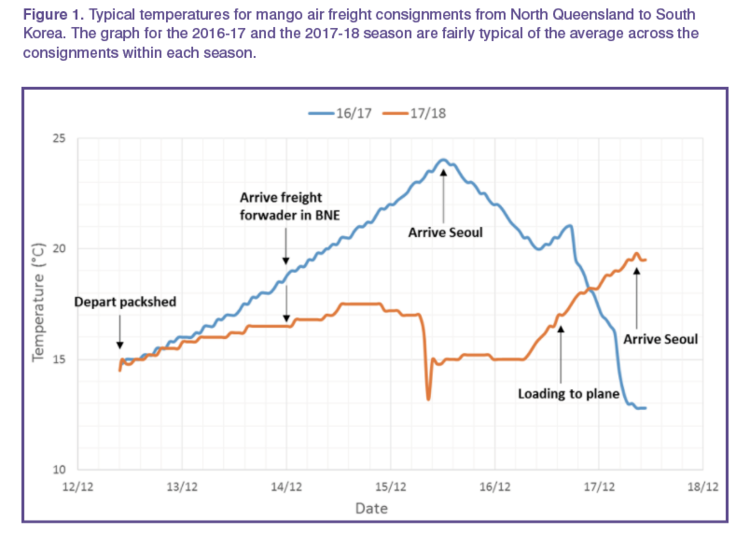 The improved temperature management also led to a small, insignificant decrease in yellow skin colour and increase in firmness of the R2E2 fruit at importer arrival, which could improve shelf life.