THE SIGNS OF MANGO MALFORMATION DISEASE

Mango malformation disease (MMD) is a fungal disease of mango, particularly their flowers. The disease was first observed in India in 1891 and has since spread to many mango-production regions around the world. 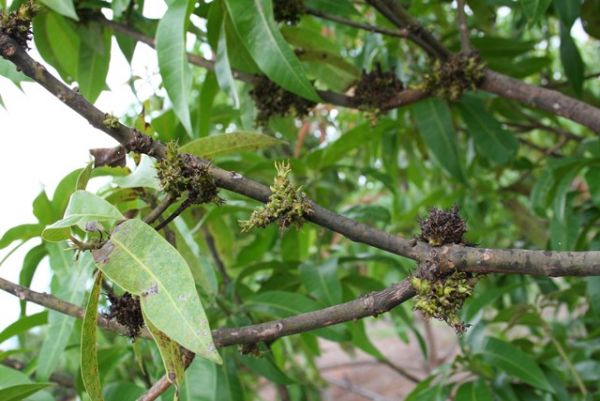 MMD causes abnormal development of flowers, leaves and shoots which leads to reduced plant growth and fruit yield. It has been associated with a number of fungal species of the genus Fusarium. The most well-understood cause of MMD, Fusarium mangiferae, was detected in Australia in 2007, it has been eradicated from Queensland but is known to occur in the Northern Territory.

Young trees in nurseries are most vulnerable to MMD. While the disease can also occur in mature trees, the symptoms are more serious for young plants as they become severely stunted.

Growing points such as leaf and stem buds on plants affected by the disease produce misshapen shoots which grow narrow and brittle leaves. Internodes (the spaces between the leaves) are also shorter than normal.

Affected leaves are smaller and tend to curve back towards the stem giving the growth a squat and bunchy top like appearance.

Galls (abnormal swellings) may also form in the axils (the meeting point between the stem and a leaf).

The symptoms of MMD on leaves and stems can look like the malformation caused by bud mites (Aceria mangiferae). However, unlike MMD, bud mites do not affect floral tissue and tend to impact older trees.

Mango plants affected by MMD will produce enlarged, sterile flowers. The stems that the flowers grow from are also thicker than normal.

Inflorescences (the clusters that mango flowers grow in) also become shorter, thicker and highly branched. They typically contain three times the number of flowers found in clusters on healthy plants.

Specifically, the disease increases the number of male and hermaphrodite flowers that are produced. These flowers are either sterile or if fertilised, eventually abort, leading to reduced fruit yield.

As the disease can be spread long distances on propagating material it is important to source certified plant material from clean accredited supplies.

Another way to protect your crop is to ensure that only clean equipment is used on your property as the disease can be carried long distances on pruning equipment. Cleaning pruning equipment between trees can also prevent the spread of disease through your orchard.

There is also circumstantial evidence that mango bud mite may spread MMD within orchards as the injuries to the plant from the mites may aid fungal infection.

If you see anything unusual, please contact the Exotic Plant Pest Hotline on 1800 084 881.