Costing millions of dollars in management and lost market opportunities, Australian growers are all too familiar with the damage caused to their businesses by Queensland Fruit Fly (Qfly). However, an ambitious research program is taking on the challenge and developing novel solutions to the Qfly issue. 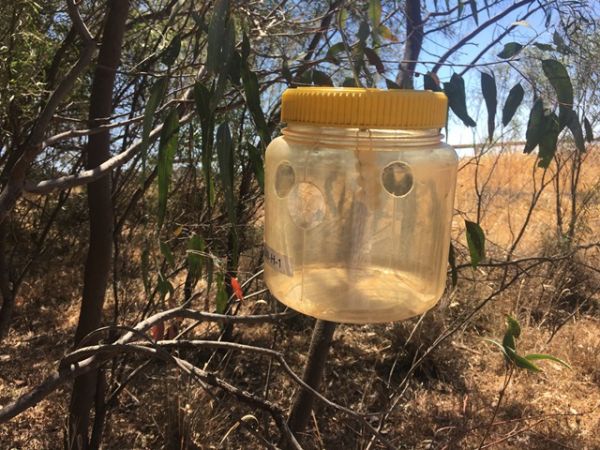 Monitoring of both wild and sterile Qfly is achieved using a dedicated trapping grid.

Qfly is one of Australia’s most significant endemic plant pests, costing growers millions of dollars every year and hampering efforts to access domestic and international markets. The significant host range, mobility and capacity of Qfly to produce multiple generations in a season makes managing Qfly challenging to say the least.

In recent years control options for managing Qfly have decreased as key chemical-based tools have been removed from accepted use. Supported through the Hort Frontiers Fruit Fly Fund, this research investment aims to address this lack of management options by delivering a cost effective and sustainable solution for Qfly.

A significant focus of this research investment is the Sterile Insect Technique (SIT) and its application to Qfly, along with a range of supporting research activities seeking to refine and enhance SIT use.

With over 50 years of use, SIT is a proven pest management tool which has been successfully employed against a range of pest insects. SIT involves the mass rearing and deliberate release of male insects which have been sterilised via irradiation. The goal of the release is to overflood and outcompete the local pestinsect population, with sterile male insects breeding with the wild female pest insects. As no offspring result from these unions, the breeding cycle is disrupted and this in turn causes a dramatic fall in population numbers.

SIT has a range of positive benefits; such as no off-target impacts on other native or beneficial insects because it is species specific. Because of this SIT is highly compatible with growers established integrated pest management (IPM) programs. Unlike other classical biological control releases, under SIT the released insects are sterile, so they do not persist or become established long term in the environment.

As a tool SIT can be employed in a range of different ways to prevent, contain, suppress or eradicate pest populations, however for maximum effect it is best used in combination with an Area Wide Management (AWM) program.

Most growers are familiar with and regularly employ IPM approaches in their production system. AWM applies the IPM concept further, employing it across a defined geographic area including all pest habitats rather than just individual farms. Collaboration between growers and the broader community is an essential requirement for AWM to work effectively. So too is the promotion and use of best management practices commonly employed, namely monitoring, baiting and hygiene.

AWM is very suited to managing insects with multiple hosts (polyphagous) and that are mobile such as Qfly. This is achieved through managing the sources of reinfestation and addressing the areas of greatest pest risk across a region.

AWM can work synergistically with SIT by reducing initial pest population loads and managing the sources of reinfestation. Doing this increases the ratio of sterile to wild insects, which improves the likelihood of sterile mating and reduced offspring, which in turn improves the effectiveness of other control measures. Further information on AWM can be found at the website: www.area-wide-management.com.au.

As part of the research program sterile Qflies, which are produced in a dedicated factory in Port Augusta (SA) and shipped to rearing out centres in Tatura (VIC) and Yanco (NSW), have been released weekly in two trial locations. The locations in Hillston (NSW) and Cobram (VIC), receive an aerial drop of two million flies per release.

The 2019/20 season of releases started in September 2019 and continued through to April 2020, with further releases planned in the 20/21 and 21/22 seasons. The focus of the releases are the urban areas near productive horticultural operations. By releasing in these areas, Qfly population reservoirs, such as unmanaged backyard fruit trees or feral trees can be effectively controlled before they become a source of reinfestation onto farms during the cropping season.

Whilst still needing further analysis, initial observations of the data gained to date are positive, with most sterile fly recaptures within a 3km radius of the centre of the drop zones, and very low wild fly captures. This suggests a positive level of fly dispersion and prevalence across the site.

Apart from assisting these regions to combat Qfly the trial releases will generate significant amounts of information, providing further opportunities to refine and improve the process.