Mulching mangoes, now that’s a new idea. Well no, some innovative growers have been mulching for years. Soil in which mangoes are grown is usually light textured, infertile and well-drained, which can lead to tree health, nutrition and water issues in the tropical, north Australian climate. Mulching is suggested to buffer these effects and potentially improve mango yields. 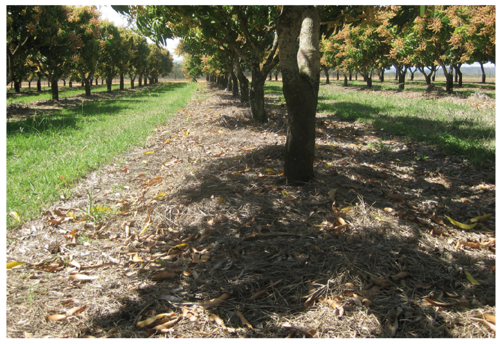 Growers Sam and Kylie Collins at Dimbulah have been mulching their Calypso and Honey Gold orchard Blushing Acres for over 10 years.

“When we first purchased the farm, we came in with a vision to transform the orchard and we are still challenging every management activity we do,” said Sam.

Side throw slasher in operation at Blushing Acres.

“One of the first changes we made was to start mulching. We have sandy soils and the Dimbulah climate is often very hot and dry. We developed a system to encourage grass growth in the inter-rows with wider diameter under-tree sprinklers and some extra fertiliser in the inter-rows. Every three months we cut the grass with a side throw slasher, spreading a layer of mulch under the trees. The mulch has improved our soil health, increased water and nutrient holding capacity, and helped us achieve high and consistent yields from year to year.

Application of hay mulch at the Samdara trial site.

“We also find that the inter-rows are a haven for beneficial insects including predators, parasites and pollinators,” Sam said.

The Research Study
In 2013, an opportunity to prove the value of mango mulching systems emerged through the Australian Government’s Action on the Ground Program. Queensland Department of Agriculture and Fisheries (DAF) and the Northern Gulf Resource Management Group initiated a four-year project which investigated the effects of mulching on soil carbon, soil health and mango productivity. An additional study included the use of controlled-release nitrogen fertiliser products to reduce nitrous oxide gas losses. Researchers from James Cook University and the Department of Natural Resources and Mines completed the team.

The project first measured the soil carbon levels in the long-term mulching system at Sam and Kylie Collins property (Blushing Acres). Mulched tree rows had a total soil carbon level of 2.4%, which was double that of the managed inter-rows and nearly five times that of the adjacent fallow paddock. Soil microbial diversity was found to be much higher in mulched rows, including higher numbers of beneficial organisms and lower numbers of pathogens, including nematodes. Honey Gold fruit yield in the mulched monitoring plots was consistently high, averaging 17 tonnes per hectare per season over the three years.
To measure how quickly mulching could change soil properties, a new replicated trial was established in an existing Kensington Pride orchard at Adrian and Alfina Zugno’s property Samdara at Mutchilba, in early 2014. Trees had been managed under a bare earth strategy for over 15 years. Hay mulch was applied along tree rows to replicated plots, at a rate of 2.2kg per m2 per year (similar rates to standard avocado practice) and compared with non-mulched controls.
EnviroSCAN® water monitoring equipment was also established in one mulched and one non-mulched plot, to measure soil moisture and soil temperature levels.

Summary
Mulching has proven to change soil properties and have positive effects on mango plant growth and productivity. Background anthracnose levels were higher with mulching; however, this did not affect fruit quality, when standard post-harvest fungicide treatment was used.

The Blushing Acres farm is an example of a low-input, low-cost system with a specialised slasher distributing inter-row slashings directly to tree rows, three to four times a year (1kg per m2 per year). Soil properties will improve slowly over time. The Samdara trial is an example of a high-input system (similar to standard avocado practice) which involved the application of out-sourced round hay bales, applied once a year at a high rate (2.2kg per m2 per year), costing approximately $3,500 per hectare (plus additional spreading costs). Soil properties will change more rapidly under this system.

Economics, existing management techniques and orchard designs will ultimately influence the suitability of mulching for individual farms and the most appropriate mulching methods.

Acknowledgements: We thank mango growers Sam and Kylie Collins and Adrian and Alfina Zugno for their cooperation and allowing us to undertake trial work in their orchards. For more information contact Geoff Dickinson at the DAF, Mareeba: geoff.dickinson@daf.qld.gov.au or (07) 4017 0792.

Check out the mango mulching video including Blushing Acres