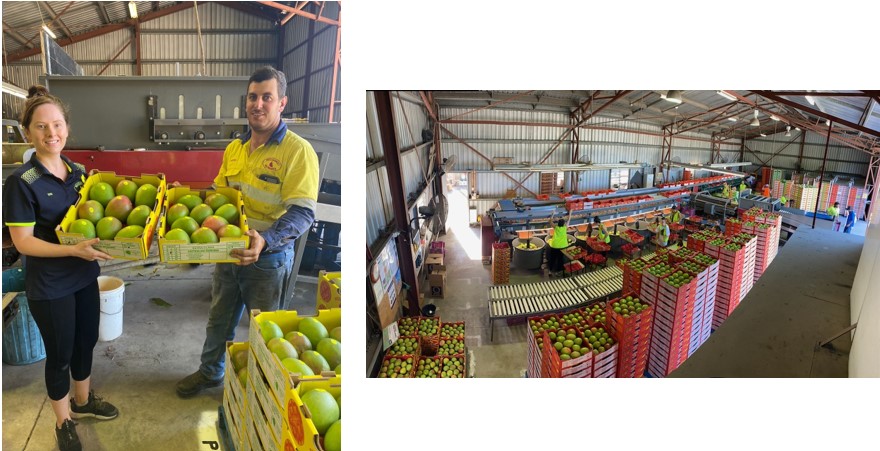 Burdekin producer Kristian Pucciarmati had previous experience using data loggers to monitor his freight, but the numbers never gave him the complete story of what his mangoes were experiencing on the journey from his farm in North Queensland to his wholesaler’s warehouse in Brisbane.

Signs of freezer burn on his fruit, gave Kristian clear evidence that not all was well within his supply chain. So, he deployed USB loggers in his pallets to trace the source of the issue.

And like all USB loggers, the data was retrieved and read long after the journey was completed.

“It meant we only ever looked at the data after we encountered a problem,” Kristian said.

“We weren’t using it to fix issues going forward or to make our supply chain better; rather it was a way to work out who was at fault when things had gone wrong.”

While the USB exercise produced less than optimum results, it did convince Kristian that maintaining temperature consistency along the length of the supply chain was critical to consistently delivering high quality fruit to the customer.

Escavox trackers use mobile technology to capture and convey data, so producers like Kristian can see their produce’s journey unfold in real time. From a dashboard displayed on his PC or mobile phone, Kristian was able to see where his fruit was travelling and the conditions to which it was exposed.

Whether in the orchard or the office, a simple glance at his mobile phone could tell him where his product was and how it was faring on its’ 1,200-kilometre journey from his farm near Ayr to the Brisbane Markets.

Kristian and his wife Jessica, marketing as Pucciarmati Mangoes, harvest 6,000 mature trees which they grade and pack at their on-farm packhouse. They freight up to 80,000 trays—about one B-double truck per day—of produce by road over the course of their season.

During the 2019-2020 season when Kristian participated in the trial, his supply chain pathway should have involved a local carrier transporting the mangoes from the Mount Kelly farm to cool rooms in nearby Ayr before loading onto a long-haul truck for Brisbane.

The data from the Escavox trackers revealed that pre-cooling in Ayr was not being done. Subsequent cooling was activated on the Ayr-Brisbane leg, although data also showed the temperature range fluctuating, mostly towards the hotter end of the scale at an average of 25.3 degrees (C).

Transit temperatures from the packhouse to ripening rooms were outside the desired temperature band 100 per cent of the time. It took an average of 1.6 days for his mangoes to reach their destination.

Kristian says the real-time tracking delivered by Escavox, gave him data quickly and easily, while ‘verifying and validating’ concerns he had about his under-performing supply chain.

“The real-time data really made the difference for us being able to understand what was happening to our fruit and why this was sometimes translating into major problems,” said Kristian.

Following the trial, Kristian changed his transport arrangements to a carrier who has made significant investments in upgrading their cool room facilities in town. He is confident the pre-cooling in Ayr is being done by the new carrier, although he did not deploy any Escavox devices during year two of the trial (in the 2020-21 season) and has not monitored his supply chain with real-time trackers since.

His fruit, he says, is maintaining quality all the way through to store and he has not been hit with a product downgrade or rejection since acting on the Escavox data.

He says he will consider further real-time tracking if short-term adjustments or longer-term strategic upgrades to his supply chain arrangements are needed. Accurate, granular data will be critical for informing these decisions, he says.

“I’d certainly recommend to any mango grower that they take an active interest in their supply chain if they want to uphold the quality of their fruit once it leaves the farm. It’s definitely worth it,” he said.