Resin Canal Discolouration—what the research is telling us

Resin Canal Discolouration—what the research is telling us

Resin Canal Discolouration has become a major issue for the mango industry over the past two seasons. Fruit from the Darwin region is particularly affected, although some incidence has been found in other varieties and regions throughout Australia. This issue negatively impacts the whole industry by damaging market confidence, thereby reducing sales.

Symptoms of RCD become more evident as mangoes ripen. Often, symptoms will not be evident in the orchard or packing shed, but show up in wholesale markets or on the retail shelf. During last season, surveys of wholesalers and retailers showed that 10-15% of mango consignments from the start of the season until early December were affected by RCD. These consignments were sold at heavily discounted prices, and when RCD became evident in retail, fruit was dumped or returned to the wholesaler.

After the 2012 / 2013 mango season, the industry initiated a one-year scoping project to define the basic features and potential causes of the disorder. The levy-funded project was undertaken during the 2013 / 2014 mango season by the Queensland Department of Agriculture, Fisheries and Forestry (QDAFF) in association with NT Department of Primary Industries and Fisheries (NT DPI&F) and the University of Queensland. Following on from this project, the industry initiated a 3-year project, starting this season, to take a deeper look at the issue. The aim of the 3-year project is to identify causes of RCD and develop management options to eradicate or minimise the impact.

What is resin canal discolouration?

Mangoes have an extensive network of canals that form a complex network just under the skin and in the flesh. These canals store resin, or sap, and are normally flesh-coloured in appearance. When the canals become brown-black in colour, it becomes the fruit quality defect known as Resin Canal Discolouration, or RCD. 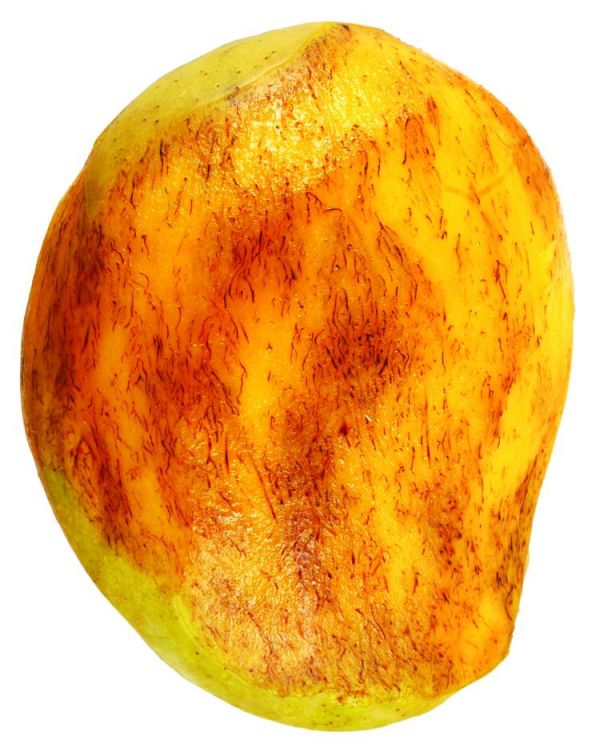 RCD is likely to occur when sensitive mangoes are produced as a result of field conditions. These fruit express the defect when they are exposed to specific harvest and postharvest stresses. 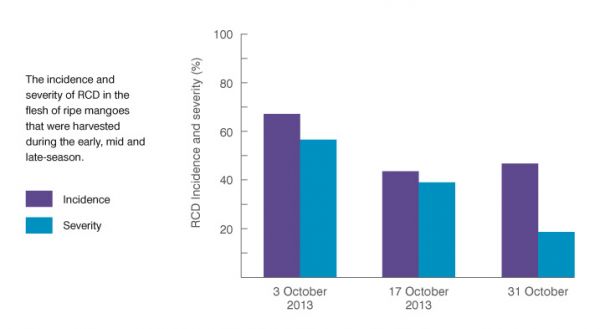 What will researchers be looking at this season?

Grower survey
To guide research, growers and packers from the Darwin area are currently being surveyed about their experiences with RCD. The survey will help researchers understand whether there is a key production or postharvest practice that may contribute to RCD.

Identifying practices that exacerbate RCD
Fruit will be sampled from six orchards in the Darwin area, three with a history of low RCD incidence, and three with previously high incidence of RCD. Each orchard will use different production characteristics suspected of contributing to the defect. Fruit will be sampled at different stages of the supply chain and evaluated for symptoms.

The role of bacteria
Researchers will confirm the identity and possible involvement in RCD of bacteria that was isolated from discoloured resin canals in the previous project. Lab tests of the bacteria will examination its effect on mangoes, and copper-based fungicide sprays will be used in orchards to monitor any incidence of RCD.

What about the 2nd and 3rd years?

In the second year of the project, researchers plan to confirm certain production practices, which will be identified this season, that are suspected of contributing to RCD.

In the third year, researchers develop a list of improved production practices to limit the expression of the defect.